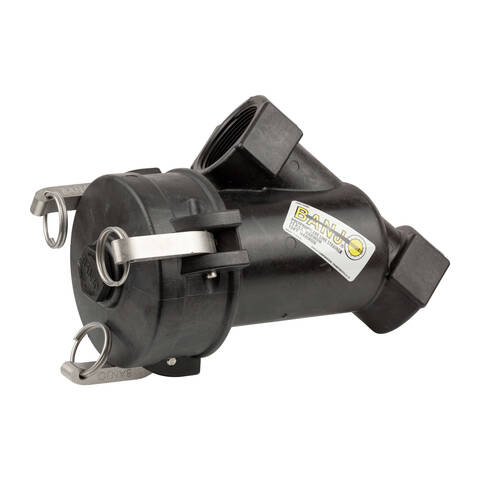 This is the 2" Banjo Poly Line Strainer we use on many of our PolySkid, PolySkid Pro and PolySkid Super systems, as well as our portable systems.

The LSQ200-06 includes a 6 mesh stainless steel screen with cam lock cap and a 3/4 plug in cam lever cap for attaching ball valve for draining or backflushing.

This item is an upgrade option for the following low-pressure systems:

If you've never used a camlock style fitting before, you'll learn real quick they are sometimes hard to install if you don't use a little trick.

When you lift the first lever up, it goes super easy because there's no friction. When you get to the second and third levers, however, you have to man-handle them to lock it. If you like man-handling stuff then by all means, do one lever at a time but if you don't like hurt fingers and busted knuckles, read on.

We've learned a much easier way that is not only faster but guarantees you won't bust a knuckle trying to lift the levers.

Instead of fully locking one lever at a time, start the first one until it's snug, then move on to the second and lift until snug, then move onto the third. Continue rotating until all levers are fully locked. Its kind of the same concept of using a star pattern on the lug nuts of a car wheel.

What happens when you fully lock one lever is that the cap ends up being tilted off center. This causes the other levers to have to "work harder" to fill the gap. By doing each lever a small step at a time, you ensure the cap stays level, making it a 100 times easier to install the cap and keeps you from getting hurt.

Sealcoating strainers are an important piece to any sealcoating tank or spray system whether you're transferring out of a bulk storage tank or spraying sealer on pavement.  Where you place the strainer is totally up to you, however we recommend that you place a strainer directly before the inlet of your pump to prevent large material from damaging the pump.  Sealcoat sprayers know all too well the buildup that happens over a season and sometimes that hard buildup can break free and get sucked into the pump.  From there, the material can get lodged in your spray hose or travel all the way down to the tip.  Clogged tips cost money in time and having a strainer would prevent this, ensuring a smooth spraying experience.

One tip that isn't discussed much in the industry, is having two separate strainers in a setup.  While it isn't necessary, think about having a strainer with a larger mesh (larger holes) that will filter out big particles, then somewhere down line having a second strainer with a smaller mesh (smaller holes) to filter the smaller pieces.  You could put the two back-to-back before the inlet of the pump, or maybe it makes more sense to have the large mesh on the inlet side of the pump and the smaller mesh on the outlet side.  Either way, having two strainers to properly filter out unwanted material from the system isn't a bad thing and certainly doesn't hurt. 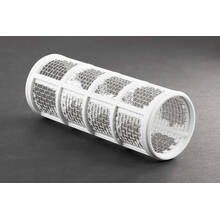