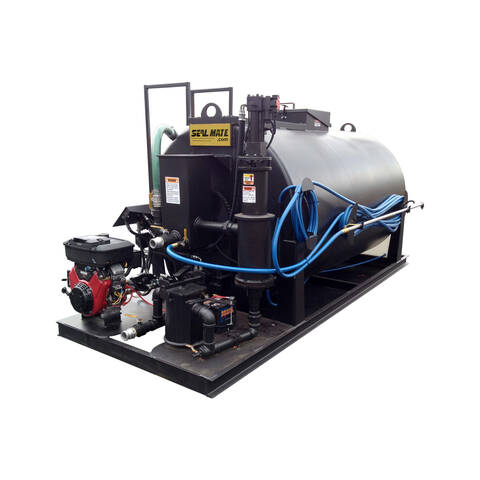 Free Shipping to lower US 48
Availability:
Built on Order

Are you ready for a professionally built sealcoating system that has been designed by a sealcoater, for sealcoaters?

The Sealmate 700 is a 700-gallon spray system on a skid that includes variable speed, full-sweep hydraulic agitation with both forward and reverse to control the 1-1/2" agitation shaft.

The pump is a 50-gallon piston sand pump that is virtually maintenance-free and can be set at variable speeds to give you the perfect flow that you desire.

This system is simple yet extremely rugged and will last for years as a full-time sealcoating spray unit. 700 gallons is the go-to size for full-time sealcoaters who are in a position to take on serious jobs or larger municipalities with big crews that need a high-quality unit that is reliable and just works.

The Sealmate 700 uses a 14HP Vanguard engine with an electric start as the powerplant for the hydraulics that power both the agitation and pump.

We're throwing in 75' of sealcoating hose with a retractable hose-reel and spray wand and that's not all...

This system is an all-around fantastic spray system for anyone looking for a great package that will get the job done, last a lifetime, and work as smooth as the day you got it.

If you only need one spray wand and hose, choose the Single Hose and Wand Setup.

If you want two spray wands and two hoses, choose the Dual Hose and Wand Setup.

The Dual Setup includes the retractable hose reel which will store one of the hoses. The other hose is stored on the side hangers. This is why the Dual setup does not offer a Hose Reel option. The Dual setup option already includes it.

If you've never used a piston pump sealcoating system and can't figure out why they cost so much more than the "perfectly fine" air diaphragm pumps, we'll do our best to fill you in on the secret of why the serious professionals spend the extra bucks on them.

If you're used to the diaphragm pumps, you already know that when they work, they work great.  No news there.  But when you have problems, whether it's from the pump, the diaphragms or the compressor, you've got nothing but problems and it can cost you a day's work or more trying to get it fixed and back up and running.  If you aren't working, you aren't making money.  Every time you run into flow issues, you have to start the troubleshooting check list to figure out if the pump is the problem or the compressor.  If it's the compressor, you might have to drain the entire tank, make sure there isn't any water in it then wait for it to refill with air.  The diaphragms can be a little tricky to troubleshoot because maybe the balls got stuck.  Maybe the diaphragms are going bad or maybe there's debris blocking somewhere.  Plus to top it off, its recommended to flush the pump after each day to make sure nothing sets up in the lines (most guys don't, but it's recommended by all of the air diaphragm sealcoat manufacturers)

Point is, you've got some work to do in-order to figure out the problem.  By now, I'm sure you're a master at figuring it out, but why not throw all of that out the window and just go with a piston pump sealcoating system?  With the piston pumps the only maintenance you need to do is oil the top of the piston every time you use it.  All it takes is a mouthful of oil to keep it nice and lubed.  The only main thing you will have to replace on a piston pump (as long as you keep it lubed) are the leather seals which can get you around 200,000 gallons of pumped material before the seals start going bad.  The seals don't cost much and it doesn't take a lot to replace them.

Piston pumps aren't with-out their glitches and sometimes the check-valve ball gets stuck but that's easily taken care of with a few bangs from a hammer.  Overall though, you'll have fewer maintenance problems with the piston pumps over the air diaphragm competitors for a little bit more money.

We heard a story about a guy who was a seasoned sealcoater and began the process of passing the torch over to his son.  It was time for a new rig, so the son bought one of the piston pump spray systems.  The father called in furious about the purchase and demanded to know how a company could wrangle his un-suspecting son into such an expensive but unnecessary purchase.  The father went on to explain how he had used air-diaphragm systems for 30+ years and they worked just fine for the money.  Wanting to teach the son a lesson in good business decisions, the father kept the system to prove the purchase was unnecessary.  About six months later, the same father calls back in and says: "My boy opened my eyes!  I never knew the piston pumps were that much better. I'll never go back to the air-diaphragms."

When you get a quality piston pump sealcoating system, you're getting more than a different pump that costs a bit more.  You're getting a better investment.

This product comes with a 1 year (12 month) limited warranty from the time of purchase. 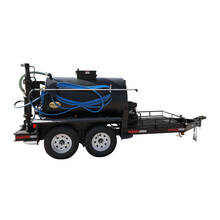 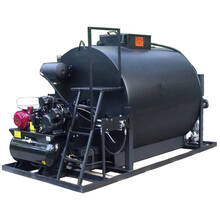